Brewery vs Distillery – What’s the Difference?

Brewing and distilling are often confused with one another, but there are clear differences between these two practices. Brewing is the process of making beer from grains, such as wheat and barley, while distilling is the process of taking fermented beverages, such as beer and wine, and separating out the alcohol from them. Both methods require a great deal of skill and knowledge to produce a quality product. In this article, we’ll explore the differences between brewing and distilling, and how they’re used to create unique alcoholic beverages. What does the process look like and what equipment is needed to get started? Keep reading to get a better understanding of the discrepancies between brewery vs. distillery. 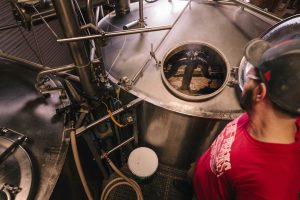 What is brewing? Steps, process & products

Brewing is the process of making alcoholic beverages, such as beer, wine, and hard cider, from ingredients such as grains, fruits, and vegetables. The process of brewing involves several steps, including mashing, lautering, boiling, fermenting, conditioning, and packaging:

So, what’s the difference between brewery and distillery? 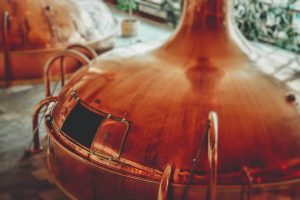 What is distilling? Steps, process & products

When talking about distillery vs. brewery, it’s crucial to mention that distilling is the process of taking fermented beverages, such as beer, or wine, and separating out the alcohol from them.

This is done by heating the fermented beverage and collecting the condensed vapor which contains the alcohol. It’s then cooled and collected in a separate container. Distilling is a bit more complicated than brewing. It involves several steps:

The end product of distilling is usually a higher-proof spirit, such as whiskey, vodka, or rum. These spirits are typically much stronger than beer or wine, and have much higher alcohol content.

Want to discover the main difference between brewery and distillery? Let’s dive into the topic!

Brewery vs. distillery – how long does it take?

Breweries generally take longer to set up than distilleries. On average, it takes between four weeks and a few months to brew alcohol, while it can take as little as one or two weeks to produce distilleries.

However, the exact timeline depends on a variety of factors, such as the type of the brewins systems and equipment used.

Top differences between distillery and brewery

There are a few obvious discrepancies between distilling vs brewing. The most noteworthy differences include:

Overall, distilling is a process that produces a much more concentrated form of alcohol than brewing does. While both distillery and brewery processes require specialized equipment, the end products are very different, and the processes to get there are quite distinct.

Which method is better?

Well, it all depends on the type of beverage you’re looking to produce.

If you’re just taking your first steps in the world of alcohol production, it’s probably best to start with brewing, as it’s simpler and requires less specialized equipment.

Check out our article on 3 crucial brewing tools and machinery to learn more.

Brewing vs. distilling are two different processes with various end products. While the first one involves the fermentation of grains, like wheat and barley, the latter method relies on the separation of alcohol from a fermented liquid, such as beer or wine, to produce a higher proof spirit.

Which method should you choose? It all depends on the type of alcoholic beverage you’re looking to make. If you’re just strating out, brewing may be an easier and less time-consuming option. However, if you want to produce high grade alcohol, you may want to go for distilling.