We recently published a blog post discussing a Scottish microbrewery that had decided to add a live piano player to the production floor in hopes of improving beer quality. Now it turns out they are not the only ones playing with the music idea. A sake brewery in Japan is attempting something similar but with a twist: they will be playing an original symphony written and recorded just for them.

Asahi Shuzo Co. is one of the most well-known sake breweries in Japan. Its brand is considered one of the best. But the company wants to do better. Based in Yamaguchi Prefecture, the company will begin playing its original symphony 24/7 while sake works its magic in a fermentation tank for 30 days.

What They Hope to Achieve

When asked whether he thinks the music will have any impact on quality, Asahi Shuzo chairman Hiroshi Sakurai said, “I have no idea, to be honest.” But that does not mean the company has no goals in mind.

On the contrary, they definitely have one main goal: to make their sake a bit milder. Sakurai said that toning down the company’s award-winning sake is a “new endeavor” for them. If the plan works, it will be interesting to see what consumers think of it.

Sake is a potent and flavorful rice wine that, unlike Western wine, is actually brewed more like beer. It can offer plenty of flavors and notes depending on its formulation. One thing is for certain though. A good sake can slap you in the face. Perhaps that’s why Asahi Shuzo wants to try something a little less obtrusive. 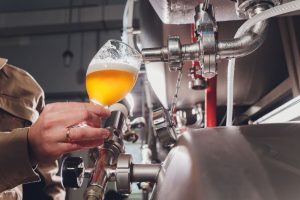 Like the Scottish brewery from the recent post, Asahi Shuzo will be playing symphony for the fermentation tanks on the production floor. The goal is for the sound waves to evoke some sort of response in the yeast during fermentation. This is not as radical an idea as one might expect. Yeast is a living organism that responds to all sorts of influences. Though studies on how yeast responds to music are limited, data does show that it can respond positively.

As a side note, the fermentation tanks will not be the only audience for the Japanese symphony. Workers on the production floor will be able to enjoy it as well. Likewise, the Scottish microbrewery discussed above incorporates its production floor with a lounge. So even though the piano player is playing to fermentation tanks, customers can relax and enjoy the sweet melodies as they sip their beers.

We are no experts in either music or its effect on yeast. If scientific research suggests that playing music can improve the quality of a brew, we are all for it. All we would add to the equation is advice on not settling for low-quality tanks. Like anything else in the brewing business, the quality of one’s fermentation tanks affects the outcome.

We take pride in our quality. We would stack our fermentation tanks up against any competitor in terms of usability, durability, production value, and ease of use. We invite you to put our tanks to the test.

Meanwhile, here’s hoping that the Japanese sake maker and Scottish brewery make the results of their musical experiments publicly available. We would love to know whether playing music has any effect on the quality of their brews. If it does work, think of the marketing possibilities!